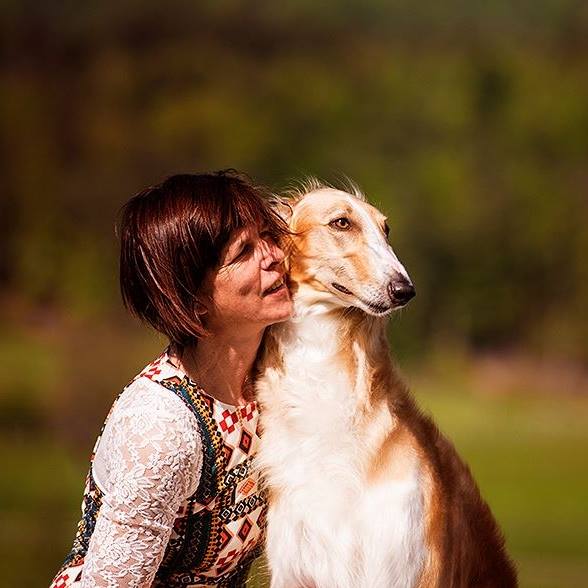 In 1996, Helena Arh picked a sire for the litter out of her CH. Netochka Wolkowo – a Polish male, Russian champion among other accomplished titles, CH. Indygo Irtysz Polot. That breeding was an outcross, Irtysz had American ancestors from his father’s side CH. Car of Twin Elms , and his mother, CH. Aria Stepowy Goniec came from the old Polish lines.

We became good friends with the owner of Polot kennel, Mrs. Wieslawa Kluska, and our kennels share similar ideas and help each other to these days. In that liter we had three puppies, Ch. Hlopkovaja Almaska, CH. Hrustalnaja Azurka and CH. Hvostati Apraskin, two females and one male. All three have become very succesful show dogs, well known throughout Europe. Almaska became the kennel’s most successful dog, gaining six championships: Slovenian, Croatian, Hungarian, Austrian, Italian and International – she’s probably the most successful Slovenian borzoi in history. She also won quite a few titles on sighthound special shows, at home in Sl, as well as thoughout Europe. All three dogs stayed in the kennel, Almaska at Helena’s home, Apraskin at my home and Azurka in co-ownership with our good friend Tomislav Klemencic from Zagreb, Croatia.

Around that time, Helena Arh became very active member of the kennel. In 1998, Nadia Wolkowo was bred to the European Champion from Italy, CH. Rajanlinjan Iceman (CH. Phaedra Kojiki x Margiitan Swetlana), a dog of American-Finnish ancestry, again an outcross breeding. From that ineresting combination, Nadja Krecic kept two females and one male, but unfortunately these dogs have never been used for breeding.Visiting the most important and the largest shows in Central Europe, Scandinavia, England and USA led us to meet a vast number of dogs and breeders and shaped our breeding ideas as well as our criteriaes. In 1999, we tried an artificial insemenation of CH. Hlopkovaja Almaska with deep frozen semen of one of the most successful English show and stud dogs of all times, famous CH. Rothesby Saker. Unfortunately, we had no success, but it led to an on-going frinedship with Sakers’s breeder and owner Sue Carter, in our opinion one of the major borzoi breeders nowadays. So, in the year 2000, we decided to have the litter out of Almaska with American dog, Stillwater Spirit of t’Tsar, bred by Charles Tyson and owned by Edith Titze in Germany. Spirit of  t’ Tsar was a powerful dog, a lot like Rothesby Saker in his overall appearance, which was quite obvious if one looked at their pedigrees: they were closely related thanks to one othe most successful show borzois ever, the unforgettable Stillwater Virginia Reel. That breeding resulted with 11 puppies, one male and one female stayed at home and both had a great, on-going show career, especially male, CH. Belogrudij Berkut Wolkowo, who became a star of the kennel, bringing the now easily recognizable type, qualities and values of our kennel to the very top of European kennels. Berkut has, among the title of Slovanian Club Champion and other titles, also won a prestigious Reserve Best in Show title on the Slovenian Sighthound Club Special Show. Next year, in 2001, we had a litter out of Azurka (also Reserve BIS winner on the Slovenian Sighthound Club Special Show) by, at that time completely dominant, European Champion CH. Gustopsowaya’s Merry Monarch (son of Rothesby Saker). Unfortunately, there were only two female puppies in that litter: Casablanca Coastwind Wolkowo who went on to live with Tomislav, and Crimson Claymore Wolkowo, in my opinion the best borzoi in the kennel. Sadly, she injured her leg during the birth so she had never been shown.

After gaining some championship titles, we bred Berkut’s sister, CH. Barhatnij Bouket Wolkowo to our CH. Hvostati Apraskin in 2004. Litter resulted with 6 males, and only CH. Divnij Don Wolkowo had been shown. The idea of that breeding was a line breeding to our foundation bitch, CH. Vorenoff Ziganka Wolkowa.In 2005, we imported a puppy from England, now a stud dog, CH. Rothesby Sholwood Miracle. Although he is at the beginning of his show career, his results are already worthy of the kennel’s long and successful tradition.In 2007, we had a litter out of CH. Bilans Bare Truth Wolkowo, imported from Poland, with a Polot kennel ancestry. That litter was sired by our CH. Belogrudij Berkut Wolkowo and pedigree of the puppies combines virtually all the best dogs from the Polot kennel with the best lines of Stillwater and Wolkowo kennels. There are several dogs from that litter already dominating show rings: males Fenomenalnij Fars Wolkowo, Filigranovij Farfor Wolkowo (living at Russkaya kennel in England) and female Filigranovaja Figurka Wolkowo.

In 2008, we had 8 puppies in the litter out of CH. Casablanca Coastwind Wolkowo, sired by CH. Rothesby Sholwood Miracle, again line breeding basedi, Nastasia, Apraskin, Almaska, Azurka, Berkut and Bouket. Our dogs have also been winning on a lot of special sighthound shows abroad, winning classes at European Dog Shows, we have a Veteran World Champion, and the only titles missing are World or European Champion – these are titles that we strive for, our breeding and showing plans are focused on trying to win these titles in the years to come.  2012 at World Dogshow in Salzburg dreams come truth and Galantnaja Galka Wolkowo became WorldWinner and Fenomenalnij Fars Wolkowo become Vice WorldWinner .

Borzoi has ceased to be a ferocious wolf hunter for long time. Nowadays, borzoi is primarily a coms Wolkowo panion dog, living with people in their homes, with their families. Despite the healthy competitive spirit, our guideline was and still is breeding healthy and stabile dogs, dogs that would bring a lifetime full of joy and pride to their owners.